Compare prices on car hire in Trencin from all the major brands and find the best deals. When you book through us, unlimited mileage and insurance are always included in the price given. 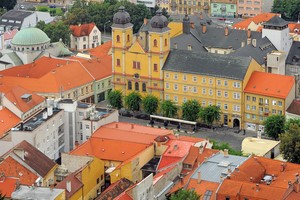 Trencin is located in the western part of Slovakia , near the border with the Czech Republic in the north.Váh River flows through town and it is about. 120 km to Bratislava in the west.Trencin is a cultural center and has a population of around 56 000 (2006). The city may have been founded on the 800’s and 1000’s was Trencin already an administrative center in the area.

The most famous attraction is the castle of Trencin Castle which was built between 1100 – and 1500’s. In the historic district, one can see old buildings and sights, including House of the City’s Executioner is a house from the 1500s where the executioner reportedly lived in the 1600s. The area is part of the old city walls from the 1400s, while a Roman inscription from 170 AD Kr. is to look at a rock wall. Trencin also offers museums, markets and festivals such as Easter market and an international jazz festival.

The nearest airport is Zilina Airport which is located approx. 70 km east of Trencin.