Compare prices on car hire in Maribor from all the major brands and find the best deals. When you book through us, unlimited mileage and insurance are always included in the price given. 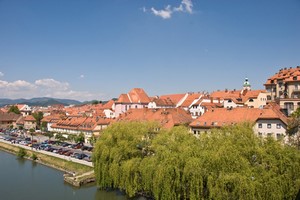 Maribor is located in northeastern Slovenia , and it is a little over 100 km to the capital Ljubljana to the southwest.The city is located about 35 km from the border with Austria to the north and approx. 70 km from the Ukrainian border in the east.The river Drava Maribor in two parts and the town is surrounded by mountains. Maribor is Slovenia’s second largest city with a population of almost 90 000 (2008).

The old town Lent has an idyllic location on the Drava and here, among other things, the world’s oldest vine that is over 400 years old and still bearing fruit. Maribor is a known producer of the Slovenian wine and offered tours of the surrounding vineyards. In addition, the city is known for being a winter resort, and here lies the nation’s largest ski resort. In the Aquarium-terrarium, you can see fish of many species and reptiles such as snakes and lizards.