Compare prices on car hire in Kalmar from all the major brands and find the best deals. When you book through us, unlimited mileage and insurance are always included in the price given. 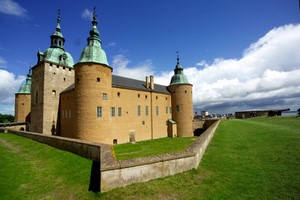 Kalmar is situated on Sweden’s southeast coast in Kalmar County and belongs to the Swedish countryside of Småland. The city center has about 35,000 inhabitants, and it is estimated suburbs – rising population of 61,000 inhabitants (2008). The city lies on Kalmar Sound – the waters between the Swedish mainland and the island of Oland in the Baltic Sea. It is possible to drive to the island via the Öland Bridge.

Kalmar is one of Sweden’s oldest cities, and has probably been inhabited since the Stone Age.

In Kalmar has great shopping opportunity – both in stores and shopping malls, and downtown are nice restaurants and pubs.

The city’s main tourist attraction is the old town of Kalmar Castle from the 1500s. The castle is open to the public, and has permanent exhibitions. Otherwise, the Kalmar Cathedral from 1700’s worth a visit, and City Park   – Where the Kalmar Art Museum is located.Art Museum is first and foremost exhibition of contemporary art.

Along the coast are beautiful beaches, which is a draw for tourists in summer.

Kalmar Airport is located 5 km west of the city center, including direct flights to Stockholm .