Compare prices on car hire in Nyköping from all the major brands and find the best deals. When you book through us, unlimited mileage and insurance are always included in the price given. 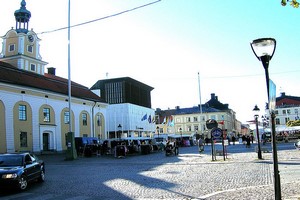 Nykoping, which has approx. 40,000 inhabitants, situated on the Baltic sea – approx. 100 km southwest of Stockholm – and is the administrative center of Södermanland (Sörmlands) County.Nyköping River flows through town. Nyköping was granted city status in 1444, but is even older – probably one of Sweden’s oldest cities.

Of architectural interest to S: t Nicolai kyrka and Alla Helgon Kyrka mentioned – both from the 1200s. Otherwise Nyköpinghus city’s main attraction. It was built as a castle / fortress is already in the 1100s – but rebuilt the castle 400 years later. Castle Tower disposed of Sörmlands Museum exhibitions.

2 km south of the city is Arnö Herrgård – listed as goods in the 1200s, but rebuilt to its present appearance in 1863. Otherwise Nynäs Castle, 30 km north of Nyköping, a popular tourist attraction. It is a Renaissance castle was originally built around 1650, but restored partially rebuilt in the 1860s. The castle is situated in a beautiful park.

The nearest airport is Stockholm-Skavsta International Airport , which is 6 km northwest of the center of Nyköping.