Compare prices on car hire in Örnsköldsvik from all the major brands and find the best deals. When you book through us, unlimited mileage and insurance are always included in the price given. 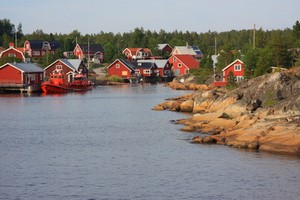 Örnsköldsvik is a port city with beautiful islands in the Gulf of Bothnia, specifically in Västernorrland County. It has approx. 29,000 inhabitants and was granted city status as late as 1894. However, it is found archaeological evidence to suggest that people lived here as early as the Bronze Age.

Örnsköldsvik is known as a sports town – and Sweden’s most famous hockey team, Modo Hockey has its base here. They play their home games in the new Fjellräven Center, which is located in the port area, and also event venue for large concerts and other cultural events.

Most of Ornskoldsvik attractions have some connection to sports – primarily various forms of winter sports. The large plant Skyttis accommodate indoor hall, as well as hockey and curling. Besides the outdoor amenities here including in the form of beautiful ski trails in winter.   Otherwise Skyttis arena for the big show Örnexpo, which is held every spring, and where a number of famous artists perform.   In addition, the city has great slopes for ski jumping and alpine skiing.