Compare prices on car hire in Oskarshamn from all the major brands and find the best deals. When you book through us, unlimited mileage and insurance are always included in the price given. 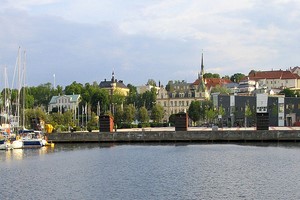 Oskarshamn, which has approx. 26,000 inhabitants, situated in Kalmar County in the landscape Småland – specifically by Kalmarsund in Sweden , which separates the mainland on the south-west Swedish coast from the island of Oland.The town, originally called Döderhultsvik, the Municipal Court in 1856, but had totally from 1646 had the status of “Köping”.

Oskarshamn is an important port city and there are ferries from here to Visby on Gotland throughout the year. In summer there are also ferry routes to Byxelkrok on Oland and the popular island of Blue Maiden north of Kalmar Sund. The entire island is National Park status.

One of the most popular attractions is the Museum of the distinctive treskulptøren “Döderhultarn” (Axel Robert Petersson, 1868-1925) – Dödarhultarmuseet. In the same building are also Oskarshamn Sjofartsmuseum. Moreover, there are many tourists who would stop by the factory outlet of the famous Liljeholmen Stearinfabrik, which has cast light in Oskarshamn since 1839. A stroll in the picturesque old town – areas “Answer” and “Fnyket” – is also recommended.

Oskarshamn flygplats is a regional airport 12 km north of the center – which has regular flights to Stockholm (Arlanda).