Compare prices on car hire in Uppsala from all the major brands and find the best deals. When you book through us, unlimited mileage and insurance are always included in the price given. 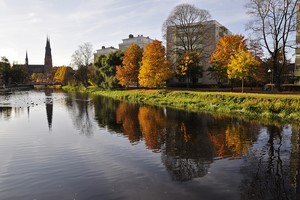 Uppsala, located approx. 70 km north of Stockholm , is the administrative center of Uppsala County.The city has about 130,000 inhabitants – and with Sweden’s 4 largest city. It is also one of the country’s main university towns.

Uppsala University was founded already in 1477 – as the first university in Scandinavia. The oldest of the surviving university buildings – Gustavianum (listed in 1622) – contains today a fascinating and rich museum, and is considered one of Uppsala’s most important attractions.

The town is otherwise a number of historic buildings to show off. Most famous is the Uppsala Domkyrka – one of Northern Europe’s largest cathedral (begun in the late 1200’s). The Uppsala Castle (begun in the 1500s) – located on a hill on the outskirts of downtown, is a popular destination.

In Uppsala there are also several beautiful parks – including the 350 year old Botanical Garden and the almost as old Linné-trädgården, named after the famous Swedish botanist Carl von Linné. The mansion Linnaeus’ Hammarby, 15 miles southeast of downtown, is named after him. The oldest parts of this building complex has a history that stretches back to 1330’s.