Compare prices on car hire in Damascus from all the major brands and find the best deals. When you book through us, unlimited mileage and insurance are always included in the price given. 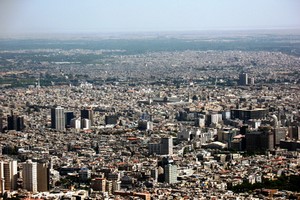 Damascus is located in southwestern Syria , and is the country’s capital and largest city with 1.7 million inhabitants (2008).The city is located 80 km east of the Mediterranean Sea, on a plateau – 680 m.

Damascus is one of the world’s oldest cities and has a long history as a cultural and commercial center for the Middle East.

The city has a subtropical climate with an annual average temperature of 16.7 degrees Celsius. July and August are the warmest months.

Damascus has several tourist attractions and sights. The largest is the Old Town, surrounded by a wall, and is listed as a UNESCO World Heritage Site. Within the walls are historical buildings, narrow streets, bazaars and mosques – includingOmayyade mosque from the year 705 This is one of the Muslim holy buildings. The old town is also the great medieval fortress Citadel of Damascus.

The old city is the Bible’s “Straight Street” – where a number of biblical events took place. At the end of this street is Ananias’ house – where the Apostle Paul received his sight.

Another popular attraction is the Damascus National Museum, which was inaugurated in 1919 – an exhibition of several archaeological and historical artifacts. Visitors can see such the 4000 year old sculptures from the Maritimes, as well as a copy of the Koran from the 1200s.