Compare prices on car hire in Donetsk from all the major brands and find the best deals. When you book through us, unlimited mileage and insurance are always included in the price given. 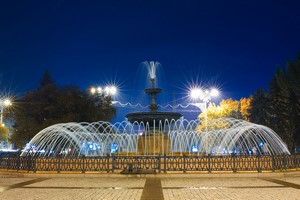 Donetsk is located east of Ukraine , and is the capital of the province of Donetsk Oblast.The city has about 1.1 million inhabitants (2007), and is an important industrial center for steel and coal. Donetsk was founded in 1869, and is basically a Russian-speaking city – after many generations of migration of industrial workers from Russia .

The town is situated by the river Kalmius, surrounded by forests, hills and steppe landscapes. Donetsk has a continental climate with cold winters and relatively warm summers.

The city has a university, opera, theater, museums and many beautiful parks. The most popular tourist attractions in town include Donetsk’s Cathedral, the hotel Great Britain from 1883 (which is the city’s oldest building), the historical museum, railway museum, amusement park Sherbakova and Museum in Push China Boulevard – with over 11,000 sculptures and paintings.

Donetsk is also a nice mijernspark with 93 sculptures, a beautiful botanical garden and Planetarium.