Compare prices on car hire in Abu Dhabi from all the major brands and find the best deals. When you book through us, unlimited mileage and insurance are always included in the price given. 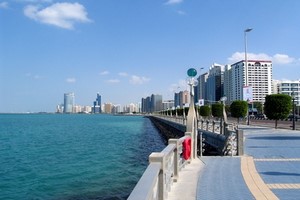 Abu Dhabi is the capital and second largest city in the United Arab Emirates bordering Saudi Arabia to the west.The city is the capital of one of the seven emirates in the country, Abu Dhabi, which is the largest emirate in the country. Abu Dhabi borders out of the Arabian Gulf and is located on the north side of the country where the land begins to turn into a point. The population of the city was about 860,000 in 2006.

Abu Dhabi is considered the world’s richest city and the 26th most expensive city in the world, which stems from, among other things, oil companies and tourism. The city limits of several amusement parks and zoos as Hili Fun City and Al Ain Zoo. One of the most beautiful mosques Sheikh Zayed bin Sultan Al Nahyan Mosque should be visited, and arranged tours several days a week.

Abu Dhabi International Airport is located about 30 km from downtown.The airport is the second largest in the country with 9,000,000 passengers in 2008.