Compare prices on car hire in Honolulu Airport from all the major brands and find the best deals. When you book through us, unlimited mileage and insurance are always included in the price given. 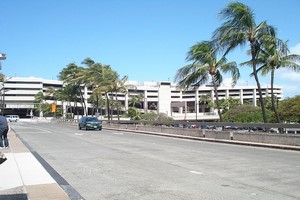 Honolulu International Airport (HNL) is 6 miles northwest of Honolulu . There are regular bus service between Honolulu and the airport. The car rental companies represented are Avis, Budget, Dollar, Hertz, National, Advantage, Alamo, Enterprise Rent A Car, JN Car Rentals and Thrifty. In 2007, 21,505,855 passengers visited Honolulu Airport. When it comes to international destinations so going 2 of 3 international flights to either Nagoya, Osaka Kansai and Tokyo Narita in Japan .Another popular destination is Sydney .It is the main base for Aloha Air Cargo, GO! And Hawaian Airlines. Honolulu Airport has three terminals which are shuttle buses between them. Honululu Airport has a good choice of shops, bars, cafes and restaurants. Other amenities include wireless Internet, ATM, post office, business center and medical center.   The hotels located in the airport’s Ohana Honolulu Airport Hotel, Best Western Plaza Hotel Pacific Marina Inn.