Compare prices on car hire in Phoenix Airport from all the major brands and find the best deals. When you book through us, unlimited mileage and insurance are always included in the price given. 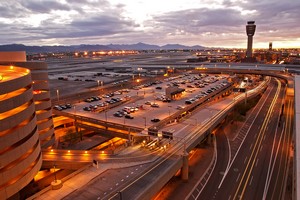 Phoenix Sky Harbor International Airport (PHX) is located 5 miles from Phoenix and is the largest airport in Arizona.There are good bus service between Phoenix and the airport, and in 2013, a new train to be completed. The car rental companies available at the airport are Advantage, Alamo, Avis, Budget, Dollar, Enterprise, Hertz, National and Thrifty.

39,891,193 passengers used the Phoenix Airport in 2008 making it one of the 20 largest airports in the world in terms of number of passengers.It is headquarters for Great Lakes Airlines and U.S. Airways. British Airways is the only company that flies to destinations outside the United States , that is, to London .The airport has 3 terminals which are shuttle bus between.

There are several restaurants, bars, cafes and shops at the airport duty free shop on terminal 4 Other amenities include ATM, wireless internet, special service for pets, a chapel, a hairdresser and Phoenix Airport Museum, which has more than 500 art objects. Hilton Phoenix Airport which is located near the airport has a business center.