If you want to visit Phoenix for your next vacation and you’re looking for an easy way to get to all the interesting spots, you need not worry. This is because you will find a number of affordable car rental companies in the city. You can also make use of the car hire services available online to rent your preferred car. 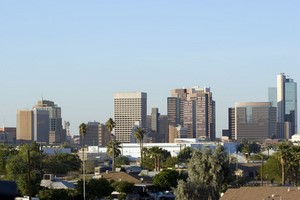 Phoenix is the capital city of the US state of Arizona. It is the most populated city in the state and, as of 2018, the population of the city was 1,660,272. It is the fifth most populous city in the USA and it is the only state capital with more than a million residents. The city was founded in 1867, when it was part of an agricultural community. By 1881, Phoenix had grown to such a size that it was recognised as a city and in 1889 it became the capital of the territory of Arizona.

Since Phoenix sits at the northeastern edge of the Sonoran Desert it also experiences a hot desert climate mitigated by the two rivers and numerous canals in the region. The city has mild winters and hot summers, and it is located in one of the world’s sunniest regions. Annually, the city records an average of over 3500 hours of bright sunshine. The average high temperature in summer in this city is 38°C but it can go as high as an average of 43°C. An all-time high of 50°C was recorded in 1960.

Phoenix has a number of performing arts centres, museums and numerous galleries for fine arts as well as being close to a number of National Monument and Park areas. Due to the sunny climate, the city is a popular tourist destination. There are a variety of attractions and it is also popular for the availability of a range of outdoor pursuits, in particular, golf. In the city, you will find a range of man-made architectural structures ranging from traditional to modern-day buildings alongside cacti and palm trees.

Due to the city’s climate and natural environment, you will find a host of interesting attractions. These include places like Phoenix Zoo, South Mountain Park and the Phoenix Botanical Garden within the city. While nearby you can visit sites of great natural beauty and historical interest such as Agua Fria National Monument, the Painted Desert, Montezuma’s Castle and many more. As a result, you will certainly find a wide range of activities to do and a large number of places you can visit in the city and its environs.

In Phoenix, there are a lot of fun activities and places to visit. One of these interesting places you can visit in the city is Camelback Mountain. The mountain is 825 meters long and it is shaped like the head and hump of a kneeling camel. It is a perfect destination for different outdoor activities such as hiking. The 11.8 miles (18.99 km) journey between Phoenix International Airport and the mountain will take you approximately 19 minutes in your rental car.

Another incredible place you can visit easily if you hire a car is the Phoenix Art Museum, which can trace its origins back as far as 1912 when Arizona became the 48th state. Howevert, the museum was not inaugurated until 1959. It has a vast collection of modern art from several great artists such as Picasso, Georgia O’Keeffe, Henry Moore and so on. The museum is approximately 4.8 miles (7.72 km) from the Phoenix International Airport and you can get there within 10 minutes using a rental car.

Phoenix has an amazing nightlife that you can enjoy during your stay. There are several bars and restaurants you can choose to visit during your stay. One of the common bars you can give a try is the Valley Bar located in North Central Avenue. The bar is estimated to be 3.9 miles (6.27 km) away from the airport and approximately 11 minutes drive with a rental car.

There are several airports in Phoenix, however, the busiest airport in the city is the Phoenix Sky Harbour International Airport. This airport is connected to a host of both local and international destinations. Some of the common destinations travelled to are London, Rome, Valencia, Venice, and so on.

Other airports you will find in Phoenix are the Phoenix Deer Valley Airport, Phoenix Goodyear Airport, Sundance Discount Airport, and so on. Additionally, you will find a wide range of rental car companies at the airports. Some of the popular car hire services available are Dollar, Enterprise, Fox, Hertz, Budget, Avis and so on.

Phoenix has a good road network and all of its roads are in good conditions. Just like most cities, Phoenix has varying speed limits for different kinds of roads. On highways, the speed limit is set at 55 mph (88 kmph), 25 mph (40 kmph) for residential areas and local streets, and 15 mph (24 kmph) for alleys. As long as you follow the speed limit, you will have no issue driving in the city.

Also, to enjoy driving in the city, you need to avoid the rush hour which occurs between 7 to 9 am in the morning and 5 to 6 pm in the evening. In addition to this, you will find several parking options in the city such as parking lots, garages, roadside parking, valet parking and so on.