Compare prices on car hire in Dubrovnik from all the major brands and find the best deals. When you book through us, unlimited mileage and insurance are always included in the price given. 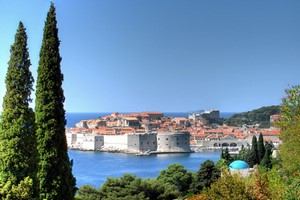 Dubrovnik is situated on Croatia’s Adriatic Sea at the extreme south of Croatia .The city is located in the Dalmatia region, and has 50,000 inhabitants. Dubrovnik is an important port city and cruise destination. There are ferry connections to such Rijeka, Split, Bari , Italy.

The pearl of the Adriatic Sea is one of Croatia’s biggest tourist spots, and a popular seaside resort. The old town is on the UNESCO list of World Cultural and Natural Heritage. It is surrounded by an almost two kilometers long city wall with fifteen towers and bastions. The largest tower Minceta, the city’s symbol. Of the city’s sights is the principal palace Knezev Dvor from 1464, a Dalmatian masterpiece of architecture, and two monasteries from the 1300s. Outside the original fortress wall is the fortress Lovrijenac. On the island Lokrum just off the coast is the palace of the Austrian Archduke Maximilian, later Emperor of Mexico .The modern hotel is located on peninsula Lapad.   Here visitors can sail and enjoy the sun. Dubrovnik hosts film festival in late August.

Dubrovnik airport is located 20 miles south of the city.

Car hire in Dubrovnik is cheap. Book a rental car through the engine over in 3 easy steps. Select the date and pick-up location and press “Search”. Choose one of the good offers, enter your credit card details and get an instant booking confirmation.