Paphos is a wonderful city with several amazing landmarks and tourist attractions. It is one of the best places to explore and enjoy a good time. From culture to the scenery, the city radiates beauty. That’s not all! There are dozens of car rental companies in the city that you can use during your stay, so you have no need to worry about transportation 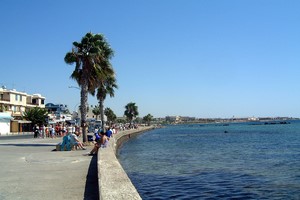 Paphos is a coastal city located in the southwestern part of Cyprus, and it is also the capital of the Paphos District. In the classical period, two locations were referred to as Paphos, Old Paphos at Kouklia and the New Paphos. Several myths are associated with the creation of the city. It is believed that the city’s name was derived from Paphos, the son of Pygmalion. The New Paphos is a famous tourist resort and it is rich in culture and history.

The population of Paphos is over 36 thousand and the people are very friendly. The city has a liberal market economy that depends mostly on tourism. Farming is one of the main activities in Paphos and there are banana, tobacco, and grape cultivations. There is a 62 miles (100 km) water distribution network in the city which is used for irrigating 5,000 hectares of land. The city also has a harbour which has grown to be less insignificant for international trade due to the creation of the harbour at Limassol.

The climate in Paphos is classified as Mediterranean,with the highest precipitation occurring between November to March. In summer, the city experiences a dry and high humidity. Snowfall in Paphos is rare and the annual rainfall (average) is 46.6mm. The city’s temperature can go up to 30-degree Celcius during June to August, due to the heatwaves from the Sahara desert. Paphos records annual average sunshine of 3,414 hours with June being the month with the highest sunshine.

Although there are a few languages spoken in Paphos, the city’s official language is Cypriot. Nevertheless, many Pafitis can speak the English language and this makes communication easier between the locals and tourists. As one of the European cities, the currency used in Paphos is Euros. Apart from that, the city is among those in the UNESCO list of cultural and natural treasures of the world’s heritage because of its awesome ancient remains.

One of the most visited landmarks in Paphos is the House of Dionysus, which consists of mosaic artworks that depict some Greek mythology scenes. Among the mosaic artwork is a scene that shows the triumph of the Greek god Dionysos in a chariot that is drawn by leopards. Agora & Odeon is one of the preserved remnants from Paphos’ Roman period, and it dates back to the 2nd century. This place is still used by Pafitis for summer festivals. From the House of Dionysus to Agora & Odeon is 0.75miles (1.2km) and it takes 5minutes drive.

Tombs of the Kings is an impressive underground tomb that was built in the 4th century BC. The tomb was carved out from rocks and decorated with elegant Doric pillars. It is believed to be used as a tomb for Paphos ranking officials during the Greek and Roman period. If you love history, then the Paphos’ Archaeological Museum is another place you should visit. It contains a collection of Cypriot antiquities such as idols, terracotta figures and different sculptures. Driving from the Tomb to the Museum takes 7minutes and the distance is 1.7miles (2.8km).

Nature lovers and hikers will find the Akamas Peninsula a wonderful place to explore. You will discover different kinds of plants which can only be found in Cyprus. Apart from that, the trails are marked, and this means that you don’t need to be a seasoned walker to explore the Peninsula. Paphos Castle is another popular attraction point in the city. Constructed in 1592, it was the line of defence for the town in the 16th century. Driving from Akamas Peninsula to Paphos Fort takes 1hour 44mins and the distance is 26miles (41.9km).

Paphos International Airport is the only airport in the city. It is a joint civil-military airport that is used for both international and local flights. Located in the southeastern part of Paphos city, the airport is equipped with facilities such as currency exchange, ATM’s and others. Some of the common destinations of people from the airport are Brussels, Athens, Cairo and London.

While in the city, you can use car rental services such as Europcar, Sixt, CTT Cae Hire, Budget and Savvas. A few of these rental companies are popular in the international market. Car rental companies in Paphos are known to provide quality services and their pricing is usually not expensive.

You can book a car online via the website of these car rental services. This will make it easy for you to find a car that suits your preference. Additionally, read the T&C of the rental service ahead to know all the necessary requirement. Apart from that, inspect the car you are renting before leaving with it.

Paphos has some of the best roads in Cyprus and this makes road transportation in the city easy. The roads are equipped with street lights as well as traffic lights. During rush hours (work opening and closing hours), the traffic is sometimes congested but for most of the days, the roads are usually free.

Speed limits in Paphos vary based on the type of roads. On motorways, the speed limit is 100 km/h (60 mph) while in built-up areas is 50 km/h (30 mph). Other roads in the city have a speed limit of 80 km/h (50 mph). Nevertheless, you should pay attention to speed signs as the limit may be different for some roads. Paphos also has several car parks in the city where you can park your rental cars. However, if you cannot find a car park in some parts of the city, you can use street parking options where allowed.