Compare prices on car hire in Tartu from all the major brands and find the best deals. When you book through us, unlimited mileage and insurance are always included in the price given. 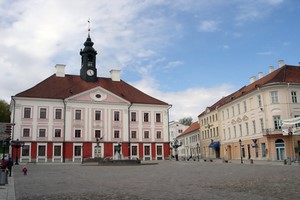 Tartu is Estonia’s southeastern part and the capital Tallinn is about. 190 km northwest of the city.River Emajõgi runs through the city and connects the lakes Peipus and Võrtsjärv which are the two largest lakes of Estonia .Tartu is the second largest city in the country and is the intellectual and cultural center. Population number in 2009 was estimated to be over 102 000 Tartu was founded in 1030 and is the country’s oldest city.

Tartu has changed hands several times and sitting on a rich cultural heritage, which the university from 1632. Historic buildings include several mansions from the 1500s, including Luke Manor with the corresponding park Luke Manor Park. To learn more about the city and the country’s history can visit one of the site’s historical museums, as Estonian National Museum. Old Town consists of narrow streets and beautiful architecture, and Town Hall Square has been the city’s market since the 1200s.

Tartu Airport is located approx. 10 km outside the city center. The airport currently offers flights to Riga and Stockholm