Compare prices on car hire in Alexandroupolis from all the major brands and find the best deals. When you book through us, unlimited mileage and insurance are always included in the price given. 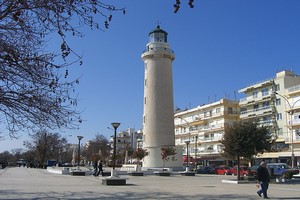 Alexandroupolis (Alexandroupolis) is located in the northeastern corner of Greece , just 40 km from the border with Turkey .The city is the capital of the administrative district (prefecture) Evros – located in the region of Eastern Macedonia and Thrace.Alexandroupolis has a population of approx. 55,000 and is one of the most important port cities in Greece.

The city was founded 300 years beforeKr. of   Alexander the Great (which it is named after) – but have historically been subject to changing regimes.In the years before in 1920 became part of Greece , it was not until the Turks and then the Bulgarians who ruled the city – and it was then known by its Turkish name – Dedeagac.

Alexandroupolis is now primarily an industrial and commercial city – and an important traffic hub between Western Europe, Eastern Europe and Turkey. The most famous attraction in the city itself, is NOK dominant white lighthouse that stands in the center of the port area.

Otherwise, there are a number of idyllic fishing villages in the immediate vicinity of Alexandroupolis – including Makri, who is known for its interesting caves. Both the city and surrounding area can also boast a variety of beautiful beaches, which, because of good facilities and excellent water quality is marked with blue flags.

Airport Alexandroupoli Airport is approx. 7 km outside the city center.