Compare prices on car hire in Kavala from all the major brands and find the best deals. When you book through us, unlimited mileage and insurance are always included in the price given. 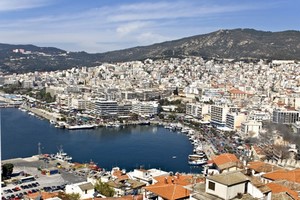 The port city of Kavala is located in northern Greece , and is the capital of the region ” Eastern Macedonia and Thrace “.The city has 154,600 inhabitants (2009) and is located at Kavalabukten, opposite the island of Thasos.

The western part of Kavala is a modern city with shopping centers and stores.On the east side we find the old town with historic houses, small gardens and narrow alleys. The city’s picturesque harbor with its colorful fishing boats is a gathering point for tourists.

The city has a number of monuments from the time under Turkish rule (the period from 1378 to 1912), among others a Byzantine fortress that sits atop a hill – with stunning views over the city and harbor.Throughout the city (and castle) there is an aqueduct from Roman times which led water to the fortress.

Other tourist attractions in the KVA: an archaeological museum – with findings from both the Neolithic period and Bronze Age, Tobacco Museum and Folk Museum. Kavala is also the birthplace of Muhammad Ali (1769 – 1849), which is considered the founder of modern Egypt , and a statue is erected in the city.

The nearest airport is Kavalas International Airport – “Megas Alexandros” – which is just southeast of downtown.