Compare prices on car hire in Kyoto from all the major brands and find the best deals. When you book through us, unlimited mileage and insurance are always included in the price given. 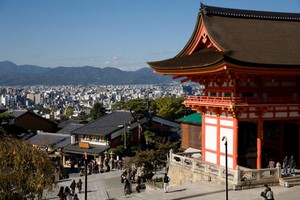 Kyoto is located 50 kilometers northeast of Osaka on Honshu-island in Japan .Kyoto is at the end of Biwasjøen and is part of the metropolitan region of Hanshin. 1.5 million inhabitants live in Kyoto (2006).   The city lies at the Tokaido-railway between Tokyo and Osaka .

Kyoto is known for being the place where the Kyoto Protocol, a protocol to the UNFCCC, was adopted by the UN in 1992. The city was the capital of Japan 794-1868, and was the center of the imperial family. Therefore, the city   several historical and religious buildings, 17 of which are on UNESCO’s World Heritage List.The old Imperial Palace is one of the best examples of traditional Japanese architecture. Kyoto also has hundreds of Shinto and Buddhist temples. Nijo Castle from 1603) is the most famous castle of Tokugawa-shogunate. It has hundreds of Shinto and Buddhist temples. The city is also Japan’s industrial arts center, and is famous for silk weaving mills, porcelain and lacquer works. Here is a national museum and art museum. In April, flowering cherries in Kyoto.