Compare prices on car hire in Gdansk from all the major brands and find the best deals. When you book through us, unlimited mileage and insurance are always included in the price given. 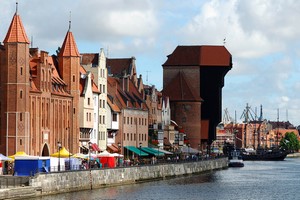 Gdansk is Poland’s sixth largest city. Gdansk or Danzig as it was called in German, is located at a former hovedarm of the River Vistula in Gdansk Bay, in northern Poland .Gdansk, together with the neighboring towns of the region Tri-city. Gdansk has 456,000 inhabitants and, together with Gdynia, Poland’s largest seaport. Here there is a ferry to Stockholm Nynäshamn and Karlskrona in Sweden .

Gdansk was first mentioned in 997 In 1360, a Hanseatic city. After the Second World War the city was Polish, but the German pre-history lurking under the surface. In recent times, Examine known as the birthplace of the Solidarity movement led by Lech Walesa. Old Town, Stare Miasto, with its narrow streets, several gabled houses from the 15000-1700’s. The beautiful old town square, Dhugi Targ is located here, along with the highly ornate St. Mary’s Church (1343-1502), who is one of Europe’s largest. It is 105 meters long, 66 meters wide with a tower of 78 meters.