Compare prices on car hire in Nitra from all the major brands and find the best deals. When you book through us, unlimited mileage and insurance are always included in the price given. 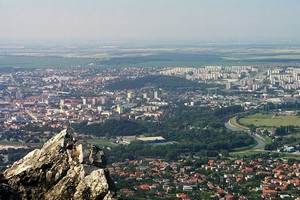 Nitra is centrally located in the western part of Slovakia .Nitra River flows through the city and is a tributary of the Danube is Europe’s second longest river. The country’s capital Bratislava is located about 80 km southwest of Nitra, near the border with Austria and Hungary .The population is almost 90 000 (2008) and Nitra has been an important city since the 800s.

There are many historical buildings and places in Nitra, including Nitra Castle which consists of four parts of which the cathedral dates back to the 1300s. Pribina Market Square is one of the most beautiful places in the city and is located just in front of Nitra Castle. In the car-free area, there are attractions such as fountains and the 5-meter-high clock that plays a tune every hour. Nitra is a cultural city and the many festivals held here as Theatre Festival of Nitra and music festivals.