Compare prices on car hire in Nove Zamky from all the major brands and find the best deals. When you book through us, unlimited mileage and insurance are always included in the price given. 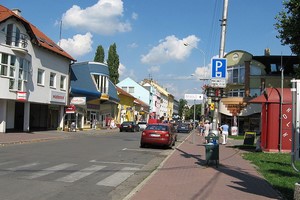 Nové Zámky located in the southeastern part of Slovakia and only 25 km from the Hungarian border in the south.The city lies on the river Nitra, which is about 80 km from the capital Bratislava and approx. 90 km to Budapest, the capital of Hungary .In 2009, the population of the city measured at just over 40 000 Nové Zámky grew up around a fort and was founded in the mid 1500’s.

Under 2 World War II, large parts of the historic town and destroyed many old buildings were lost. Yet there is still some historical buildings to see, mainly churches and monasteries as the Catholic church and Franciscan monastery from the 1600s. To learn more about the history you can visit the museum Muzeum Jana Thaina Nové Zámky. In addition, it is a beautiful scenery in and around the city and national parks, spa facilities and a number of galleries.