Compare prices on car hire in Helsingborg from all the major brands and find the best deals. When you book through us, unlimited mileage and insurance are always included in the price given. 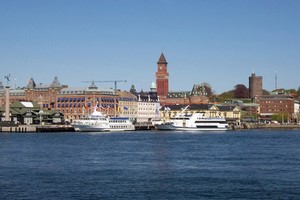 Helsingborg is located in Skåne County in southern Sweden , and has 92,000 inhabitants (2007).The city is situated where the sea area between Sweden and Denmark – Öresund – at its narrowest. Sea area is 4 km long, and there has been a ferry connection between Helsingborg and the Danish town of Elsinore since 1892.

Helsingborg has a rich cultural and entertainment – with museums, theater and concert hall.In   center is also the 35-meter-high castle tower Kärnan from the 1300s – a remnant of the old fortifications.Kärnan is one of the city’s major sights, and from the top of the tower has fantastic views over the city.

Other tourist attractions in Helsingborg include St. Mary Church from 1100-century in Romanesque style, Dunkers Culture House – an architectural attraction, which also houses art exhibitions, music scene, tourist agency and restaurant, Fredriksdal Air Museum – with its historic buildings and its botanical garden, Sofiero Castle and Castle Park and Tropikariet – where the whole family To learn more about exotic animals.

Otherwise, the city has great beaches, nice parks and squares as well as good shopping.

Angelholm – Helsingborg Airport is 34 km north of the city center, including direct flights to Stockholm .