Compare prices on car hire in Sharm El Sheikhh from all the major brands and find the best deals. When you book through us, unlimited mileage and insurance are always included in the price given. 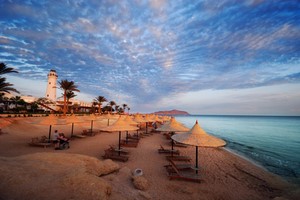 Sharm el-Sheikh was built by the Israelis in 1967 when they took the field during the Six Day War. The city is located entirely in the south of the Sinai Peninsula, which lies east of Egypt and west of Israel , Jordan and Saudi Arabia .Southern tip of the peninsula leads right into the Red Sea. Suez Canal is located on the peninsula’s western side, while the Gulf of Aqaba is situated on the east side. The population of the city was measured to 12 000 in 2009.

The city is one of the most famous and visited tourist sites in the area and many Europeans travel here because of the climate and the beautiful Red Sea. Snorkelling and scuba diving are particularly popular because of the tropical fish and coral reefs, and there are also opportunities for other water activities. Visitors can choose between large, exclusive hotels, or smaller and cheaper. Many of the largest hotels in the tourist areas deadlines with attractions such as swimming pool, casino, restaurants and shops.

It takes about 20 minutes drive from the center of Sharm el-Sheikh International Airport .This is the second busiest airport in Egypt after Cairo.