Compare prices on car hire in Maarianhamina from all the major brands and find the best deals. When you book through us, unlimited mileage and insurance are always included in the price given. 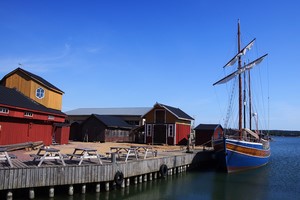 Mariehamn (Finnish: Maarianhamina) is the capital of the archipelago of Aland Islands, situated in the Baltic Sea, just off the southwest coast of the Finnish mainland. It has been – and remains – a seaport, which also characterizes the attractions it has to offer. Mariehamn has approx. 11,000 inhabitants – that is, nearly half of Åland’s population lives here.

Åland is a hundred percent Swedish-speaking community, and are all strongly influenced by Swedish culture. Archipelago is an autonomous landscape in the Republic of Finland – and also has its own national flag.

Many of the sights in Mariehamn is located in the port area. In Österhamnen found Sjökvarteret with its red-painted warehouse environment – and a popular shipbuilding museum. In Västerhamnen can visit the Old Jokes house and the museum ship “Pommern”, which is a 100-year-old steel bar. This is also the ferry port, which has passenger ferry connection to Stockholm in Sweden , Turku (Turku) and Helsinki (Helsinki) in Finland – as well as Tallinn in Estonia .

Other attractions in Mariehamn, the following are mentioned: Parks Lilla Holmen and Badhusparken – and Mariebad, the Baths which includes swimming, “äventyrsbad” for children and outdoor swimming beach.

Åland has its own airport – Mariehamn Airport – which is 3 km outside Mariehamn center.