Compare prices on car hire in Mykonos Airport from all the major brands and find the best deals. When you book through us, unlimited mileage and insurance are always included in the price given. 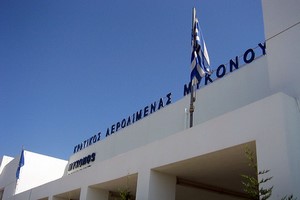 Mykonos Island National Airport (JMK) is a small airport located 4 km outside the town of Mykonos .There is no public transportation from the airport so taxis are the best option. Many hotels offer however own transport. There are several car rental companies at the airport, including Avis, Hertz and Sixt. There is little information in English about the airport.

Mykonos Airport was opened in 1971 and in 2003 was 340,000 passengers pass through the airport. The running regular routes throughout the year, airlines Aegean Airlines and Olympic Airlines. The busiest route is to Athens .Between May and October there are also many charter companies and low cost companies that fly here. EasyJet flies to and from London , Rome , Milan and Paris .

The airport has no restaurant but a cafe that sells basic food and drinks, ATM, duty free and souvenir shop. There are no hotels at the airport, but the nearby hotel Tharroe of Mykonos Hotel De Luxe has meeting rooms and conference center.