Are you planning to visit Porto and need to find a car rental company, so you can enjoy everything the city and its whereabouts has to offer at your own pace? There are all sorts of things to do and visit in this wonderful city, and car hire is the perfect way to discover everything there is. From historical neighbourhoods to modern architecture, the capital of the Douro region is a great getaway for city travellers. 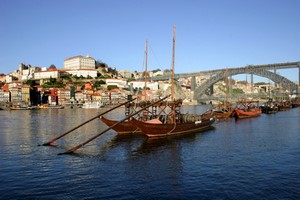 Located in the northwest coast of Portugal, Porto is the second-largest city in the country, and the so-called “capital of the North”. The city has a population of over 297,000 inhabitants and stretches along the Douro river estuary for 41.42 km2 (15.99 sq mi). With a rich and long history, Porto dates back to the Celts and developed under the Roman occupation, after becoming a centre for the expansion of Christianity under Visigothic rule. The area was then known as Portus Cale and the name gave, later on, origin to the modern name Portugal.

Porto is recognised for its most famous export, the worldwide-known Port wine. It’s one of the world’s oldest protected designation of origin products, dating back to the 1700s. Nowadays, you can visit one of the many Port wine lodges located in the city of Vila Nova de Gaia, just across the Douro river. It’s a 5 km (3 miles) trip, taking about 5 minutes, and a must-do while in town. Matosinhos has some of the best beaches in the region and is located just 15 minutes (about 7km/4 miles) from the city centre.

In Matosinhos you can visit the exuberant church Igreja do Bom Jesus, a great example of northern Portuguese Baroque architecture, as well as the modern Sea Life, the largest aquarium in the North of the country. Another great place for a day-trip is Aveiro, often dubbed as the Portuguese Venice, due to its many canals. Located 57km (35 miles) from Porto’s centre, it will take you about one hour to reach using your rental car. While in Aveiro you can’t miss the Moliceiros, the typical boats, and a taste of Ovos Moles, a delicious egg delicacy typical of the city.

Porto is a great city to explore by car, and even though it might be difficult sometimes to find free parking in the street, the city centre has some paid parking where you can leave your rental car while exploring by foot. The medieval Ribeira neighbourhood stretches along Douro’s waterfront and is UNESCO World Heritage-listed. From there you’ll also have a privileged view of the 19th-century Ponte Dom Luís, an amazing iron double-deck bridge, as well as of Vila Nova de Gaia, just across the river. Porto is a proud city full of hidden gems waiting to be discovered.

Portugal’s second city is the perfect blend of old and new, tradition and modernity. With your rental car, you’ll be able to explore Porto at your own pace and find out everything this incredible place has to offer. The city is not that big, so you’ll be able to check its most interesting attractions, places and sights without hassle. Rua de Santa Catarina is a pedestrianised street and a traditional shopping hub in the city centre. The street is packed with both traditional and international shops. One of the city’s most beloved cafés, the Majestic, is located here.

A stop at the Majestic is a must-do for everyone visiting Porto. A jewel from the Art Noveau movement, from its façade to the interiors, at the Majestic you can indulge yourself in traditional Portuguese pastries and get a glimpse of a time long gone. Close to Rua de Santa Catarina, is the Mercado do Bolhão, built in neoclassical style and probably the most traditional of all Porto’s markets. A visit to this part of town wouldn’t be complete without checking the wonderful Livraria Lello, a bookshop established in 1906. Its fabulous staircase inspired J.K. Rowling when imagining Hogwarts.

Using your car rental, you can reach Fundação de Serralves (Serralves Foundation) in about 5 minutes from the city centre. Located at about 5 km (3 miles) from downtown Porto, Serralves is a magnificent cultural institution specialising in contemporary art. The museum is set in an Art Deco palace surrounded by an 18-hectare park and boasts of having some of the best exhibitions in the country.

Traditionally called Tripeiros, literally meaning tripe-eaters, due to the most famous dish Tripas à Moda do Porto (Tripes Porto’s Way), the inhabitants of the city have a close relation with food. Tripe has been consumed since the 1600s and became a household dish of Porto. Another traditional must-try is the Francesinha (little Frenchie), a delicious sandwich adapted from the French croque-monsieur. For a traditional experience, you can visit Casa Aleixo, located in Campanhã at about 2,5 km (1,5 miles) from the city centre or O Paparico, in Areosa (5km/3 miles from the city centre).

Porto is served by the Francisco Sá Carneiro Airport, located at about 11 km (6.8 miles) northwest from the city centre. Opened in 1945, the airport is the second busiest in the country and serves as a base to EasyJet, Ryanair and TAP Air Portugal. If you want to book a car as soon as you arrive in Porto you can do so by visiting one of the car rental companies’ desks just before Security.

There are several reasons why you should rent a car in the Aeroporto Francisco Sá Carneiro, like security, flexibility, comfort and variety. You can do so by choosing between Avis-Budget, Europcar, Goldcar, Guerin, Hertz and Sixt. All the desks are opened from 07:00 to 00:00. The airport also provides a valet service called ValetXpress, as well as great parking options that will surely match your every needs.

Being a busy hub, the Aeroporto Francisco Sá Carneiro has flights to and from major European cities such as London, Geneva, Paris, Madrid, Munich, Istanbul or Amsterdam. From Porto, you can reach most European destinations without hassle, as well as fly to Luanda, in Angola, and Toronto in Canada. It’s also the fastest way to reach other Portuguese cities, like Lisbon, Faro, Ponta Delgada in the Azores and Funchal in the island of Madeira.

The city of Porto, along with its whereabouts and nearby cities has over 1 million people, so driving around here can be a bit hectic. In the city itself, especially in the historical centre, roads are narrow and the cobblestones may cause an issue to drivers not used to the type of driving they require. However, Porto is very well served with highways and motorways in great condition, like the VCI (Via de Cintura Interna), the circular highway surrounding the city.

As in most Portuguese cities, while driving in Porto you must beware of road signs and indications. There are many one-way streets that are not properly flagged and may pose an issue, so drive carefully and keep your wits about you. Remember that driving is on the right-hand side of the road and that traffic has the right of way and always comes from the right. Seatbelts are mandatory, even for those travelling in the back seat.

Portugal has a low drink-drive legal limit, 0.49 as opposed to 0,80 in the UK, so beware of Port wine tastings before hitting the road. Speed limits are 50km (80 miles) inside the city, 80km (128 miles) on secondary roads and 120 km (193 miles) on highways. Even if you see locals speeding, obey the limits. Porto has several paying carparks throughout the city where you can leave your car while strolling on foot. If you park in the street beware that, even though some streets are free, most have parking meters, and the city centre is usually more expensive.